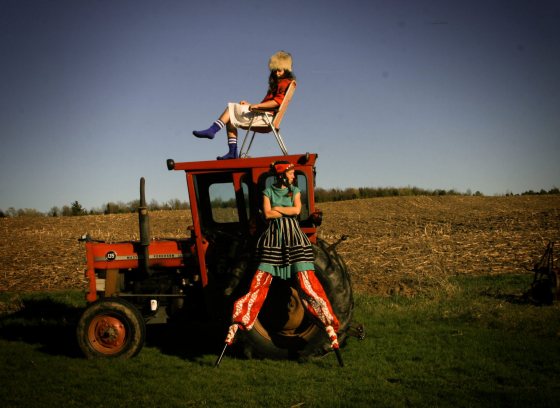 Two homeless dancers, one born in Quebec, the other born in France, inhabit their flying and tumbling bodies, pushing the boudaries between contemporary dance, physical theater and acrobatic stilts.

”Like houses through a kaleidoscope” is an attempt to redefine our relationship to home, using the language of acrobatic stilts and dance improvisation as a base. One was born in France, the other and in Quebec. They both have been on the road for many years, without a house to come back to. They can barely remember the name of all of the generous people that hosted them, but are dreaming to send each of them a postcard. Isabella and Lea are part of this new generation of urban nomads that I called fortunate homeless; those who created their identities by improvising a shelter made of habits (repetitions, opinions, gestures), memories and relationships. Each time we inhabit a space, we adjust to it, it becomes how we live our life; it becomes part of who we are. “Ours is the century of enforced travel of disappearances. The century of people helplessly seeing others, who were close to them, disappear over the horizon.” This performance has been created in one of the performer’s hometown in Quebec, as an attempt to reconnect to our roots. Moitié Moitié push the boudaries of contemporary dance and acrobatic stilts by offering a cutting-edge performance that blends contemporary circus, new dance and theater.

Moitié Moitié is a duet between Isabella Kerouac (Canada) and Lea Kiefer (France). Both nomads for many years, they met touring the world and teaching at international Contact Improvisation festivals. They are now interested in developing new possibilities in the art of acrobatic stilts, based on their common practice of dance improvisation.

Supported by the Professionnal Creation and Production Funds of the Municipality of Arthabaska, Office Franco-Québécois pour la Jeunesse and Canada Arts Council, ”Like houses through a kaleidoscope” was created and toured in Quebec (Canada) in May-June 2013. The Santa Cruz Fringe Festival is proud to present the US premiere of this new performance work on July 12-25 2013, at Motion Pacific Theater.